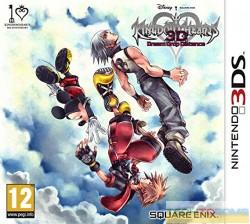 Kingdom Hearts 3D: Dream Drop Distance ROM is an action-adventure game developed and published by Square Enix for the Nintendo 3DS, revealed at E3 2010. The game is the seventh installment in the Kingdom Hearts series and was released in Japan on March 29, 2012.

The game was developed by h.a.n.d., with series creator and director Tetsuya Nomura serving as both co-director and character designer.

Kingdom Hearts 3D: Dream Drop Distance is an action role-playing game that features gameplay similar to previous games in the series, with the addition of new elements. FlowMotion allows players to move quickly around enemies and traverse the environment in a variety of ways; for example, running up walls or grinding on rails. Reality Shift is a touch-based mechanic unique to each world, which alters the battlefield and can be used to solve puzzles or defeat enemies. In order to travel to new worlds, players must first complete a “Sleeping Keyhole” puzzle game.