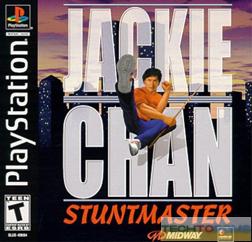 Jackie Chan Stuntmaster ROM is a 2000 PlayStation action game developed and published by Radical Entertainment. The game is based on the real Jackie Chan, a renowned Hong Kong martial arts actor. According to the game’s scenario, Jackie Chan’s grandfather was kidnapped by a group of unknown individuals, who then traveled to New York City. To rescue his grandpa and learn more about these kidnappers, Jackie went to New York City. In New York City, Jackie Chan will have to deal with several obstacles in order to save his grandfather. The game has 15 levels with progressively increasing difficulty that players must master. Players will also visit various locations in New York City, including the waterfront, sewers, roofs, factories, and streets. Each level ends with a boss fight for the player to win. To advance to the next stage, players must defeat this adversary.

The player’s character may encounter animals in the game, which appear to be harmless. When these creatures are killed, they drop rice bowls that restore HP. This object restores a proportion of the protagonist’s health. You will come up against multiple opponents, including cops, thugs, and robbers… In addition, you will have to deal with several of the pre-designed traps along the way. Depending on the strength of your opponent, you will lose HP if he or she touches you. You can destroy them utilizing your own abilities. When Jackie Chan defeats an opponent, he may sometimes obtain blue orbs as a reward. These orbs boost Jackie’s power when he assaults foes. In a location, you may use a unique skill to fire off a beam of light. When you utilize this talent, all opponents in its path will be destroyed. It’s used in an effective way to achieve the most out of it. When you collect all 30 blue orbs, you’ll be able to use this unique skill five more times. This special ability will make defeating the final boss at the end of each map simpler by allowing players to accumulate many times. If the character dies, all of his orbs and abilities are lost. After passing a level, players have the option to save their progress.